Behind a Gifted Horse, a Powerful Part-Owner 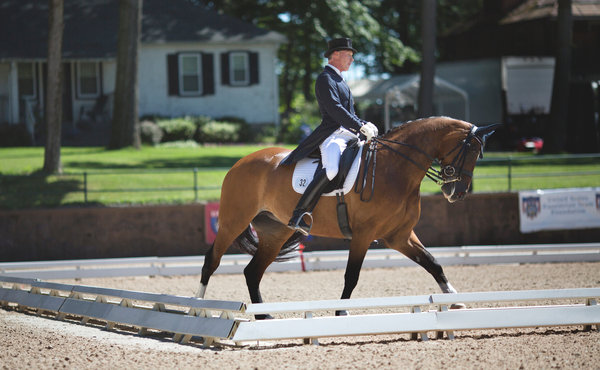 Rafalca is a 15-year-old Oldenburg mare with rich bloodlines. Jan Ebeling, above, has trained the horse for six years.

LONDON — More than 10,000 athletes are descending on London this week for the Summer Olympics, including global names like Usain Bolt, Oscar Pistorius and Michael Phelps. But the one athlete that is seemingly under stricter guard than any other — sequestered outside London for training, with the public and news media not allowed to lay eyes on her — is a horse.

Rafalca, a 15-year-old mare from Germany, is owned in part by Ann Romney, wife of the presumptive Republican candidate for president. On the eve of the opening ceremony, the equestrian horse represents an exceedingly unusual collision of national politics and the Olympics, making her an unlikely celebrity in a sport not unaccustomed to the highest reaches of society and royal splendor.

Before the equestrian competitions begin at Greenwich Park — one of the royal parks of London that counts foxes and deer on its vast expanses of green just southeast of the city center — Rafalca will gain international attention in this Olympic host city. Mitt Romney is expected to meet Friday with United States athletes as Rafalca settles into the stables in Greenwich Park. She spent the past few weeks at Layham Hall, a private dressage facility in Suffolk, England, after arriving by plane.

“I just feed her a bunch of watermelons,” Jan Ebeling, the equestrian who rides Rafalca, said about the flight in a recent telephone interview. “It’s not enough for a horse forever, but it’s good for the road.”

The United States Equestrian Federation and the United States Olympic Committee have refused to make those working with Rafalca available for interviews in the days leading up to the Games and prohibited the news media from even seeing the horse. Through a spokeswoman, Ann Romney declined to be interviewed.

With a milk chocolate coat, raven tail and white socks above three of her hooves, Rafalca will next be seen in the dressage ring on Aug. 2, performing in a sport sometimes referred to as horse ballet in which a horse and rider, typically clad in a top hat, tails and riding boots, perform a series of complex movements, often to music. Her pedigree is supreme.

Rafalca is an Oldenburg, which are often branded with an “O” on their legs and have been bred for centuries as everything from carriage horses to artillery horses to farm horses. As leisure time increased, Oldenburgs were increasingly bred for show jumping and dressage, favored for their long legs and strong gaits.

Rafalca’s grandfather (dam sire, the father of her mother) was Rubinstein, who has been called the stallion of the century by German breeders.

Rubenstein “was a fabulous dressage horse,” said Ken Braddick of Dressage-News.com, a Web site that closely covers the sport. “In modern-day dressage, what’s really important is that you have horses that can be powerful and fit because doing a Grand Prix with those movements involves incredible strength and a kind of mind to flawlessly make those transitions.”

Dressage “is the most difficult horse event,” Braddick said. Olympic horses may also compete in jumping or eventing, a sort of equine triathlon that combines dressage, jumping and cross-country. “They’re incredible athletes.”

Many of the jumping genes end up in dressage horses like Rafalca. Her sire, Argentinus, was a successful Hanoverian jumping stallion, with a similar dark mocha coat to Rafalca’s, and part of a long line of successful jumping horses going back to the 1930s.

Rafalca was born in Menslage in northern Germany in 1997, bred by Erwin Risch, an acclaimed German dressage breeder who runs Zuchthof Risch. The pastoral facility in northern Germany has specialized in breeding since 1975 and has produced competitive horses including Air Jordan Z, a successful jumping horse.

Generally, the horses are kept at the facility for three to four years, and some preliminary training is done — walking the horses in circles and getting them accustomed to saddles. When Rafalca was young, some 50 to 60 horses lived there, according to Heike Haferkamp, Risch’s daughter, who now works with her father in Menslage.

Fueled by her success, Rafalca’s lineage has since been repeated by the breeders, Haferkamp said, and currently a 2-year-old stallion there with the same Argentinus-Rubinstein blending lives there. “Rafalca looks more like Argentinus,” Haferkamp said. “But the talent, the talent she gets from Rubinstein.”

Rafalca was purchased and brought to the United States in 2006, at a time when dressage horses were fetching six- and seven-figure price tags. (Rafalca was not sold at auction and her price has not been disclosed publicly.) Care and keeping for such horses is not cheap. In 2010, the Romneys reported a $77,000 loss on their tax returns for their share of Rafalca, which is owned by a partnership that includes Ebeling’s wife, Amy, Ann Romney and Beth Meyer.

Unlike racehorses, which compete when they are young, dressage horses are often trained for years and years, not reaching their competitive peaks until they are at least 10 years old. The longer a horse is with its trainer — Rafalca and her rider Ebeling have been a pair for six years — the better.

Rafalca “did everything perfectly,” said Miriam Dhanji, a horse consultant who splits her time between England and Germany. “The horses are bred to perform at high levels. The breeding does a lot, but the actual training is a big part of it.”

Ebeling, a German native who has been a United States citizen since 1998, heard about Rafalca from a friend of his who had seen the horse. Ebeling, like many riders, preferred geldings over mares. “Mares can be difficult sometimes,” Ebeling said. He told his friend he was not interested.

But the friend persisted and persuaded him to visit Rafalca on his next trip to Germany.

“I fell in love with her right away,” Ebeling said. “I think it was her temperament. She’s a horse that puts her heart into it. She tries really hard to please.”

Rafalca was walked in front of the Ebelings and they were impressed with her gait. Then he rode her and was taken with how responsive she was to subtle movements of his legs and shifting of his weight, crucial details in dressage. Her shoulder and neck structure, too, befit the sport, and is one of the traits of the Rubinstein descendants. Romney and her partners purchased Rafalca in 2006.

Rafalca’s Oldenburg qualities were on full display for Ebeling that day in 2006: her mood, gait and responsiveness to commands. “If you have a horse with a good temperament, that can overcome a lot of other small shortcomings,” he said.

That’s part of what Ebeling has been training to do as a rider for years. He was born in Berlin, but spent most of his childhood in Oldenburg, Germany, not far from where Rafalca was born. As a child, he took lessons at a nearby riding club and fed and groomed the horses and maneuvered the horse manure cart to pay for his lessons. “From an early age, there was a high level of commitment,” he said.

A student of the German riding school, Ebeling worked his way up through an apprenticeship and now oversees 30 to 40 horses, including Rafalca, at the Acres, a ranch in Moorpark, Calif.

“Rafalca is a classic German horse,” Braddick of Dressage-News said. “It fits with Jan’s personality and Jan’s training, which is very consistent and classical. They fit each other.”

From the start, developing trust with Rafalca and honing her training proved challenging. Dressage horses may not be primed for elite competition until they are 10 to 15 years old and after years of continuous training.

“The essence of dressage,” Ebeling said, “is we’re trying to show the power of the horse and the balance of the horse in total relaxation. You have to look powerful, but it cannot look forced. That’s our problem sometime. The good riders that make it look easy, that’s the point.”

In a show arena, the rider is not allowed to use his voice with a horse, but may shift his weight or pat a horse.

When Jan Ebeling began working with Rafalca, she was not at the Grand Prix level, he said. In 2007, he competed her at a few events below the Grand Prix level. At her first two competitions in Pebble Beach, Calif., she came in second and first place.

“There were some movements that needed to be perfected,” Ebeling said. “A lot of strength and muscle building to be done.”

Rafalca worked on perfecting her piaffe, the trot that is a signature move of the sport. Through 2008 she continued to compete, placing first in four competitions that year.

“You never really know whether a horse is going to become a Grand Prix horse,” Ebeling said. “Some of the movements are so complicated that some horses never really learn them. There’s a lot of hoping and praying that goes on.”

As the two became more comfortable with each other and Rafalca continued to compete well, Ebeling, who had never been on an Olympic team, and Rafalca made a failed bid for the 2008 Beijing Olympic team. It was a disappointment for Ebeling and Rafalca’s owners.

“I think now, looking back, she would have been too young,” Ebeling said. “It was a real bummer.”

But a new problem emerged for Rafalca shortly after the Olympic team trials. During the 2009 World Cup in Las Vegas, one of her first international competitions, shortly after Ebeling and Rafalca entered the ring for their event, “she saw ghosts everywhere,” Ebeling said. “She did not want to be in that arena. Her warm-ups were fantastic, but she saw something and that was the end of it. Horses, they’ll keep you humble.”

After the Las Vegas debacle, Ebeling added sports psychology to his training repertory. He also worked with Rafalca in an arena with mirrors and more noise, hoping to expose her to elements beyond the normal tranquillity of the ranch.

It seemed to work. In 2010, Rafalca was chosen as an alternate for the World Equestrian Games. In 2009, 2010 and 2011, Rafalca competed in the World Cup. Rafalca continued to improve and competed well in the United States but struggled in international competitions. Last July, Rafalca and Ebeling came in 28th at a Grand Prix event in Aachen, Germany, and in April this year, Rafalca came in 15th, 16th and 17th in a series of Grand Prix events.

Many dressage insiders considered Rafalca a long shot for the American team, especially with Ravel, a 14-year-old Dutch Warmblood gelding, tearing up the international circuit. (Ravel also earned a spot on the dressage team.) The Ebelings, too, knew that making the United States team would be competitive. Rafalca finished third at the Olympic trials, barely earning her a berth — and a first Olympic spot for the fit, 53-year-old Ebeling.

After trials in Gladstone, N.J., Rafalca traveled (yes, with fruit) to Layham Hall to become acclimated before the dressage competitions. Rafalca was slightly jet-lagged, taking naps midday in her stall, but has adjusted well from the heat of the Northeast to the cool climate of London, Amy Ebeling said. “She does better in a cool environment than a hot and humid climate,” she said.

Rafalca will stick to her normal diet and workout schedule, with some grazing on the fresh grass at the facility. Ebeling does not train in complete isolation leading into the competition, but his focus becomes sharper, he said. “It’s easier for Jan to focus on him and his horse,” Amy Ebeling said. “She’s been in great spirits there.”

She added: “I know it sounds crazy. But she is so loving and sweet. She is so kind and knowing. You look into her eyes and you can see her soul. I don’t know if we’re ever going to have another horse like this again.”