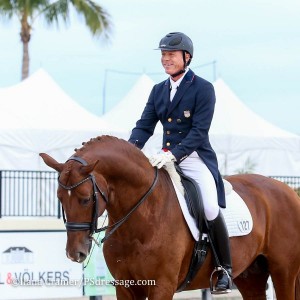 Wellington, FL – January 31, 2016 – U.S. Olympian Jan Ebeling made the trip from California to Florida this season to seek out stiff competition in Wellington with two up-and-coming stallions, Breitan and FRH Rassolini, and he’s off to a positive start in the opening weeks of the circuit. After competing Rassolini Thursday and Friday in the Adequan Global Dressage Festival 3 CDI-W, he capped the week by riding Breitan in a national Developing Grand Prix class Sunday morning, scoring a 69.750 percent. Ebeling is looking forward to everything Wellington has to offer.

“It is amazing here,” Ebeling said. “I love it here. Where else can you go to the supermarket and see all riders? I feel amazing with two developing stallions. I feel like I won the lottery, twice!”

Ebeling was pleased with Sunday’s performance from Breitan, a 11-year-old Hanoverian stallion (Breitling W-Carrera, Blue Hors Cavan) owned by Beth Meyer, Amy Ebeling and Ann Romney. The stallion, whom he imported at the age of 5, is new to high intensity showing, and he is excited to further develop their partnership throughout the season. 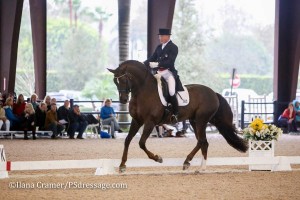 “For the first time he went really, really well and I was very happy with him,” Ebeling said. “He was on; he was paying attention. I haven’t shown him a whole lot, and when I have shown him, they have been very spread out. He hasn’t seen many horse shows, so given that, he was really well behaved today.”

He continued, “I would like to get Breitan into a Grand Prix by the end of this season, hopefully. Not just the Developing – and I don’t mean just, because I am really happy with how today went.”

Ebeling has found success internationally with Rafalca, a now-retired 19-year-old Oldenburg mare owned by the same trio who now own Breitan. With Rafalca, Ebeling competed in the 2009, 2011 and 2012 World Cup Finals and the 2012 London Olympic Games. 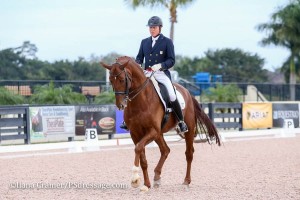 Earlier this week, Ebeling and FRH Rassolini, a 13-year-old Hanoverian stallion (Rubioso N-Sweetheart, Silvano) owned by Vantage Equestrian Group, scored a 66.1 percent in Thursday’s Grand Prix and a 68.85 percent in Friday night’s Grand Prix Freestyle, a World Cup qualifier. Rassolini is a successor to Rafalca, and Ebeling hopes to find international success again by building a different relationship with the stallion. Having the same support team that was behind Rafalca is giving Ebeling encouragement to build a presence in Wellington.

“I am loving the East Coast,” Ebeling said. “I am really here for Rassolini, who is doing the CDIs and who we thought really needed to go and get into the shows where there is a lot of competition.” 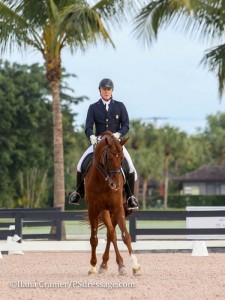 With two stallions under one roof, energy can be high, but Ebeling finds a way to work through the horses’ excitement that feeds off of Wellington’s competitive atmosphere. Ebeling is working to bring out the strengths of each horse and use them to his advantage in the ring.

“The training process isn’t different with the two horses; we are really working on pretty much the same things,” Ebeling said. “Breitan isn’t as advanced as Rassolini is. They have similar weaknesses but different strengths. Breitan can piaffe and passage until the cows come home, and Rassolini has super pirouettes. Different horses have different weaknesses and strengths. It’s important to play on what each horse enjoys doing.”