You could be forgiven for assuming Jan Ebeling had a new horse in his barn when you saw his name paired with Sergio Leone atop two small tour CDI classes this past weekend at the Adequan Global Dressage Festival in Wellington, Florida.

But in fact, Sergio Leone has been in his barn since he was 6, just under a different name: Santo Domingo.

Due to Fédération Equestre Internationale rules regarding passport names, the 10-year-old Oldenburg gelding (Sir Donnerhall—Sinfonie V.D. Heide, Stedinger) owned by Ann Romney reverted back to his birth name of Sergio Leone when he started competing internationally, and now he’s making that name known, winning the Intermediaire I (68.52%) and Intermediaire I freestyle (71.95%) CDI March 1-4.

We caught up with Ebeling, 59, of Moorpark, California, to learn more about “Santo” and find out how his 2012 London Olympic Games partner Rafalca is enjoying motherhood.

COTH: So what’s the story on Sergio Leone?

Ebeling: We bought him when he was 6 through a friend and business partner Christian Heinrich at a barn in Bremen, Germany, from a lady we’ve purchased several horses from, Birgit Wellhausen.

He was this tall, leggy, very pretty horse. It’s easy to like him because he’s a good-looking horse. He had very good training. He had started some changes already. He was easy to ride and a good mover. He was everything we were looking for.

When we imported him the first year I started showing him at third level. He did the developing Prix. St Georges. We didn’t take him to the championships because it was too much travel. We started the CDIs a little bit last year and are going to move him up to the Grand Prix this year. He’s schooling everything, it’s just a little green for him to go into the I-2 yet. Jan Ebeling and Sergio Leone. Photo by Susan J. Stickle.

Tell me about his weekend at AGDF.

He was good in the Prix St. Georges. The first day he’s always a little bit timid, and it shows a little bit. He gets a little tight, and I think the judges pick up on that. The second day he’s back to normal. He was very good in the I-1, and in the freestyle he was just on.

It’s a good freestyle—the music goes really well with his gaits, and the beat is really cool. The freestyle was designed by Karen Robinson, who’s done my freestyles over the years. It’s got Spanish guitar.

I think the music is so important. It has to fit the horse. Originally it was designed for another horse that was about the same level that he is, but a very different type. When Karen suggested we borrow that one, I said, “Are you sure? They’re so different.” And she said, “No, no. I think their movement is very much alike.” She was right, yet again! I hate to admit it!

What are the origins of his name?

Sergio Leone was an Italian director. He made a lot of spaghetti westerns. If [Santo] reminds you of a person, he’s a very handsome guy. He could be Italian, I guess! Jan Ebeling and Sergio Leone at AGDF in February. Photo by Lindsay Berreth. 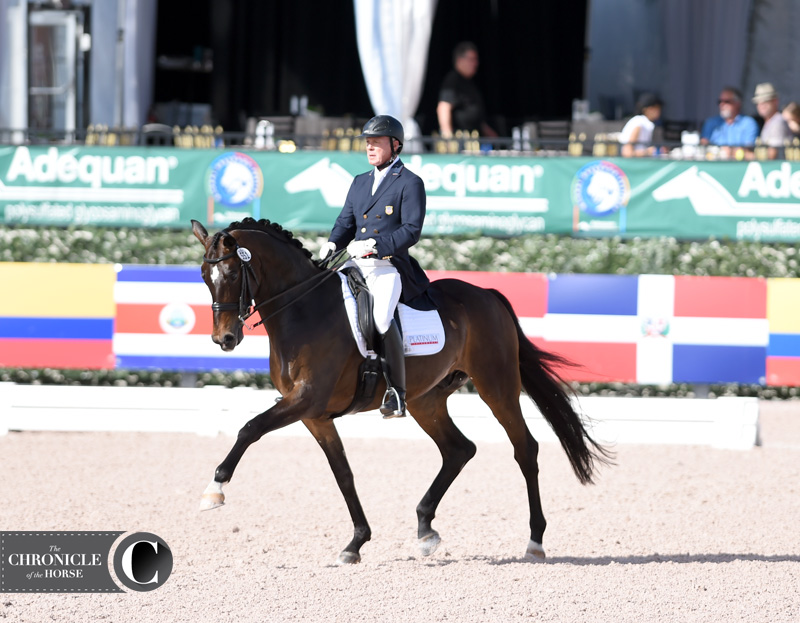 Jan Ebeling and Sergio Leone at AGDF in February. Photo by Lindsay Berreth.

He’s very alert. He’s not a spooky horse at all. He’s very calm and very together and has always been very easy to train. He really pays attention. I think he knows that he’s very handsome.

What is the plan for this year?

He started in the CDIs, but I really wanted to take my time to campaign him a bit more on the small tour. He’s doing his one-tempis and is doing a nice piaffe/passage. Not that it’s show ready, but I’m hoping that before we go back to California I can put him through an I-2. I haven’t quite decided yet. I don’t like putting a lot of pressure on my horses. I like to take my time. He’s a very smart horse. He’s also a very sensitive horse. I think that it’s something that over the years I’ve learned in my training—the fastest way is to go slow. He’s ready when he’s ready. We’ll just stick to that motto.

Why did you decide to do the Florida circuit instead of the Adequan West Coast Dressage Festival this year?

We were here last year and the year before. Every time we come it seems to be that we’re coming here a little bit longer. We bought a farm in Wellington last year because we felt that the Florida circuit is a wonderful place to be. It’s a lot of fun being in the environment and having these wonderful shows with a lot of spectators. It’s just very different than anywhere else in the country.

It’s a wonderful thing that they’re trying to do [the AWCDF]. I would love to see a circuit in California that starts maybe mid-April and goes into May and June when the weather in California is really perfect. Instead of running at the same time as Florida, it would be something that adds to the Florida circuit. I think that people from the East Coast that are in Florida and thinking, “What can we do next?” could go to California and compete there. We have wonderful shows and wonderful venues, not just in southern California, but in central California. We have a new place in Paso Robles that’s great, and the equestrian center in Murrieta is really wonderful.

I think it’s a matter of timing to attract the riders. After the Florida circuit is over, it would be fantastic to move on and do that.

How is Rafalca? And what about her foal that was born in 2016?

She is wonderful! I have two darlings. Rafalca was my darling No. 1, and Rafaela is her baby. She reminds me very much of Rafalca. She’s a different color, black, but she’s gorgeous. I think she has many character traits that Rafalca had, as far as you can tell with a young horse.

We’re all playing with picking up her feet and handling her. She seems to be a really nice mover. I’m super excited about her.

Rafalca is pregnant right now. She’s due in eight weeks. Rafaela was by Connaisseur [a Dutch Warmblood]. We tried to breed [Rafalca] the next year, but she didn’t take. We bred her to Willy Arts’ stallion Gaspar de la Nuit DG (Ravel—Ceolieta, Sir Donnerhall). We’d seen him at the local shows and really like his breeding, especially the relation to Ravel [Steffen Peters’ longtime Grand Prix horse] and Rafalca having been on the team with him. We thought that was kind of cool to do that. Rafalca and Rafaela. Photo courtesy of Jan Ebeling. 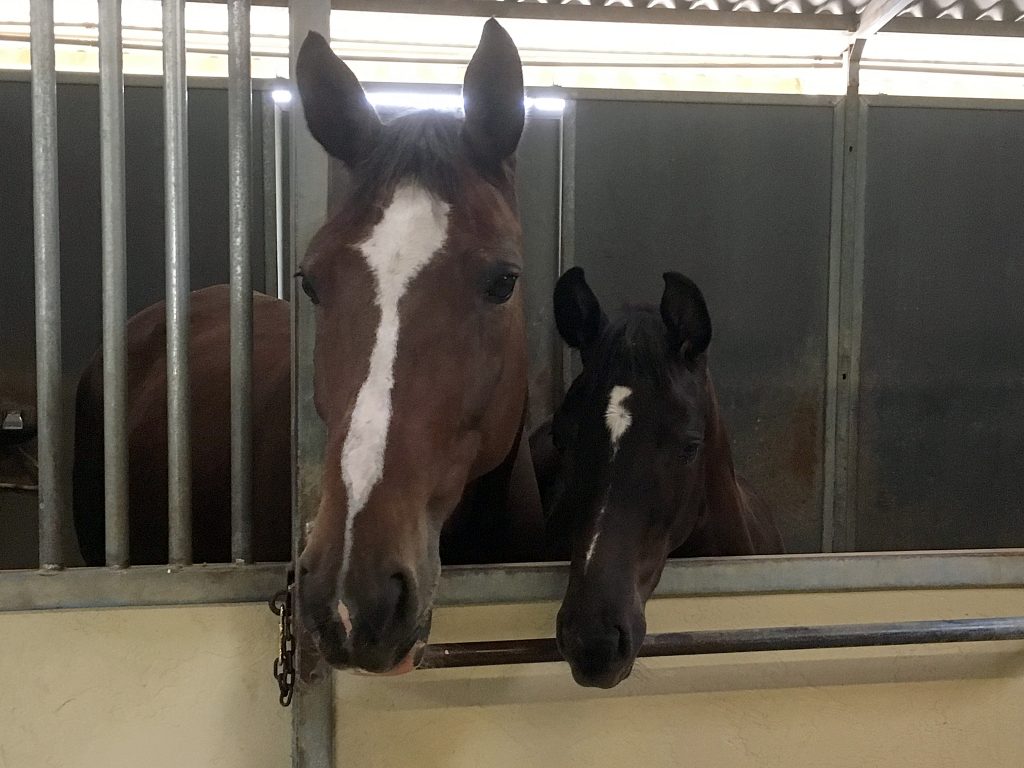 Where is your former Grand Prix horse FRH Rassolini now?

He’s been sold. He’s with one of my students, a young rider, Christian Simonson, who is doing a fantastic job. He just had a really super weekend. They get along really well. Their plan is to try out for the young rider team this year.

He was on the junior team with a different horse that won team gold last year. That’s the next step for him, and the long-term goal is to do the U-25 [Grand Prix]. Christian Simonson riding FRH Rassolini with Debbie McDonald at the Robert Dover Horsemastership Clinic. Photo by Ann Glavan. 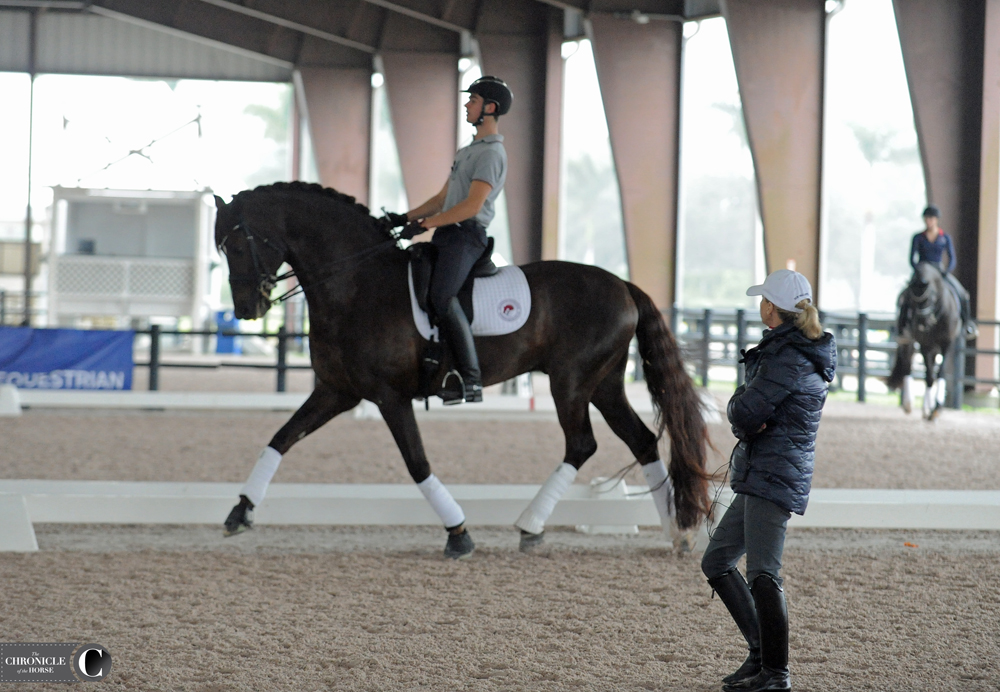 Do you have any other exciting horses in the barn?

We purchased a 10-year-old mare, Indeed V [a Danish Warmblood (Hofrat— Gorklintgards Indeera, De Niro) owned by Vantage Equestrian Group LLC] that I showed Intermediaire I this weekend. She’s a super exciting horse. She has piaffe/passage and does her one-tempis. She’s going to come out at I-2 or Grand Prix in the next few weeks. We’re hoping that she’s going to be the horse stepping into Rafalca’s footsteps.

She’s [similar in character]. She’s Rafalca with a turboboost! I rode her with Carl Hester in his Masterclass a couple of days ago, and she went well. Carl really liked her. Not so many people have seen her, but the ones that have seen her think she’s an amazing horse. Jan Ebeling is excited about new talent Indeed V, shown here during Carl Hester’s Masterclass. Photo by Ann Glavan. 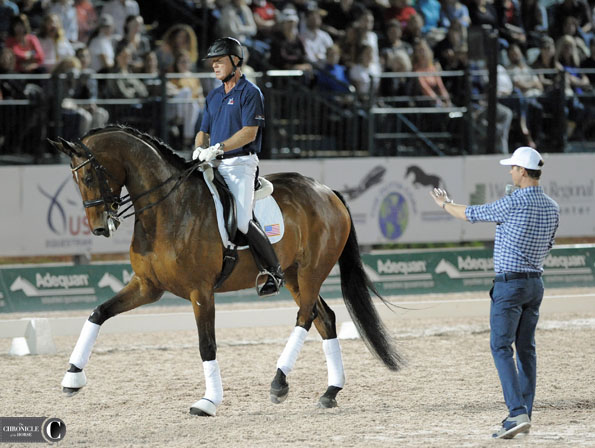 Your son Ben has been competing in dressage and show jumping. What’s it like to watch him succeed in two disciplines?

He’s bi-coastal at the moment. He’s jumping [at HITS Coachella (Thermal, California)] to the 1.50-meter grand prix, which scares the heck out of me! He’s loving it, and he’s really enjoying the dressage.

I have to say his love is probably the jumpers. But he likes animals, and he’s a horse lover. I think he enjoys the training of the horses, and I think he understands how the dressage can help the jumpers. I think ultimately his path is probably the jumping, but he has a wonderful horse right now, a 10- year-old Hanoverian Behlinger (Breitling W—Wotaria, Weltmeyer), that he’s trying out for young riders with this year, and he’s determined he wants to do well with this horse.

He has a wonderful jumper, Caddilac FS Z (Contefino—Caloma). He was jumping 1.10-meter and 1.20-meter with his previous horse, and this horse moved him up quite a bit. For me it’s amazing what these kids can do at this age.

[But] I hope he gets a so-called “real job” that allows him to have a few horses, but not have to make it a profession. You’re relying on your health, and sometimes that doesn’t work out so well for everyone. Being a professional high performance athlete, many things can go wrong, and in our business with the horses there’s a lot of luck, whether you do dressage or jumping or any other discipline. Jan and his wife Amy watch their son Ben riding in the Robert Dover Horsemastership Clinic. Photo by Ann Glavan. 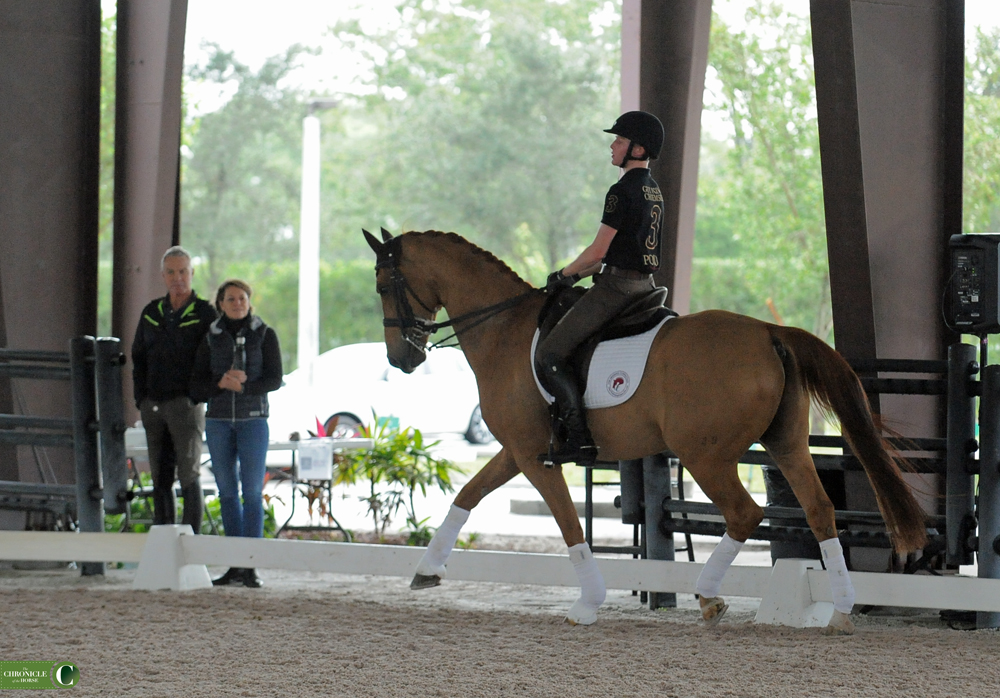 Jan and his wife Amy watch their son Ben riding in the Robert Dover Horsemastership Clinic. Photo by Ann
Glavan.

He’s able to try out for both jumping and dressage [at the North American Junior and Young Rider Championships]. I think he’s doing it because he loves competing. He loves both.

Wherever it takes him, both [my wife] Amy and I are supportive of what he does, of course. We’ve never really forced him to compete. We said, “If you want to compete that’s great.” The only thing we said to him is that you have to know how to get a horse on the bit, then you can take it to whatever level. You can trail ride or once a week hop on a horse.

That’s probably why he’s stuck with it and why he’s gotten so into it, because we never forced him to do it. I’ve seen that in the past—that parents live their dream through their kids, and at some point the kid says, “I’m done, I don’t want anything to do with it.”